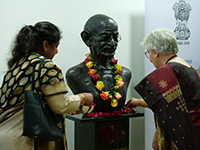 Born 150 years ago, Mahatma Gandhi continues to inspire people around the world to pursue their goals in a non-violent way. He has more in common with PRIF than just an idealistic affinity by working for peace. Since 2006, PRIF has hosted a bust of Gandhi, which India donated to the city of Frankfurt.

On the occasion of the anniversary, the Indian Consulate General and PRIF invited to a commemoration ceremony at PRIF. After a greeting from PRIF Executive Board member Mrs. Susanne Boetsch, the Indian Consul General in Frankfurt, Mrs. Pratibha Parkar, recalled in her speech the principles followed by Gandhi.

Pictures of the event 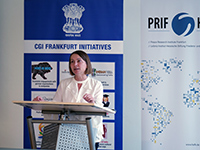 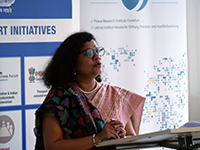 Additional publications:
Gandhi today - up to date or out of date? HSFK-Standpunkte, No. 4/2006 by Harald Müller and Thorsten Gromes (in German)