Thorsten Gromes speaks on virtual conference on the effects of military interventions, organized by the University of London 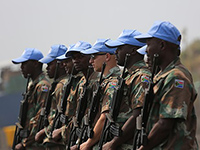 Despite that most formal colonial regimes collapsed by mid-twentieth century, military inter­ventions (MIs) by major powers and multi­lateral agencies (the United Nations and NATO etc.) have con­tinued to take place. The United States and France inter­vened for about 15 and 10 years in various nations during 1950s which increased to 23 and 19 years during 1990s. Ongoing atro­cities and dis­orders in countries of interest for big powers such as Syria, Iraq and Af­ghanistan, and diffusion of ISIS-affiliates, particularly in Africa, suggest that the increasing trend in MIs is likely to continue.

In fact in the past two decades MIs have gained in­creasing level of legal and formal recog­nitions such as the United Nations’ World Summit unanimous adoption of resolution in favour of Respon­sibility to Protect in 2005 and France Defence White Paper of 2013 which enunciates inter­ventionism as an important policy measure to protect overseas interests. Military inter­ventions are mainly launched to influence favourable changes in economic, political and strategic spheres in inter­vened nations. But are these changes favourable to the well­being of societies at the recipient end?

Thorsten Gromes is a speaker for Session 1: Military Interventions and the End to Mass Atrocities: Conditions for Success and Failure.

Please find further information, the registration form and the programme on the conference page.