Rule and Resistance in a Globalized World: PRIF and the Cluster of Excellence "The Formation of Normative Orders" are presenting an international conference in Frankfurt, 2-4 March 2017 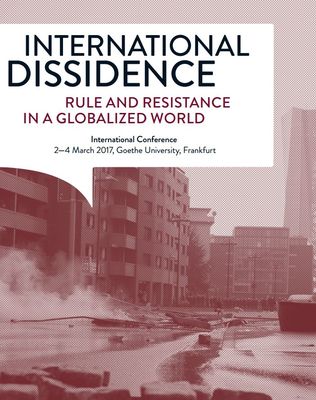 From Occupy Wall Street, right-wing mobilization in Europe, and radical jihadism to protests against UN peacekeeping and India’s opposition to the Non-Proliferation Treaty, resistance is a ubiquitous, but ambiguous, aspect of global social and political life. It follows many courses, has many purposes and wears several guises. Similarly, rule presents itself in many forms. It is present in the power of the international banking system, ‘Western’ imperialism, the legitimation of violence, in homogenizing globalism and asymmetrical global rules. But while these diagnoses are familiar, theories of resistance and rule all too often remain disparate and vague. This conference therefore focuses on the dynamic relationship of rule and dissidence. In order to do so, we begin by asking: How has resistance changed across time and social spaces? And how does it relate to transnationalization?

Resistance challenges, or sometimes produces and reproduces, systems of rule. However, the fragmentation of academic discourses has impeded the scholarly treatment of the constitutive relationship between rule and resistance. Some scholars focus on specific types of resistance (e.g. populist movements, cyber activism, terrorist groups or the extreme right) or specific processes (e.g. radicalization, deradicalization, or transnationalization). Still others study the variety of forms and practices of rule in reaction to various forms of resistance. While such specialization has yielded deeper insights into the significance and operation of rule and resistance in particular instances, it has also occluded the bigger picture. Scholarly understanding of the relationship between resistance and systems of rule has suffered as a result. The conference will attend to this bigger picture.

- resistance to specific systems of rule, ranging from international norms, regulations and bureaucracies to rule by elites;

- the dynamic interactions between authorities and resistance movements, including how international organizations cope with protest, reactions to digital dissidence, and various forms of international disciplining of protest within the state;

Presented by:
Peace Research Institute Frankfurt and the Cluster of Excellence "The Formation of Normative Orders" (Goethe University Frankfurt).