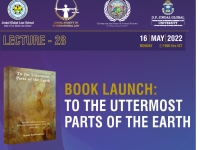 On May 16, the Jindal Society of International Law organizes a hybrid book launch on Martti Koskenniemi’s To the Uttermost Parts of the Earth. Legal Imagination and International Power 1300-1870 (CUP 2021). Martti Koskenniemi is undoubtedly one of the leading scholars of our time in the field of international law and its history as well as in critical legal studies. With his earlier monographs – From Apology to Utopia (CUP 1989) and The Gentle Civilizer (CUP 2001) – he has enormously contributed to the so-called ‘historiographical turn in international law’. The publication of his new book is therefore eagerly awaited among scholars on the History and Theory of International Law and related disciplines. Following on from a book symposium he co-organised for Völkerrechtsblog, Hendrik Simon will comment on Koskenniemi’s new book against the backdrop of his own research on political violence and its justification in past and present.