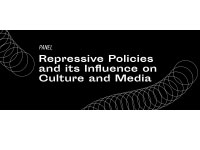 Logo of Panel Discussion "Repressive Policies and its Influence on Culture and Media": https://lichter-filmfest.de/en/films/panel-discussion-repressive-policies-and-its-influence-on-culture-and-media/1382

At the latest when the national conser­vative and right-wing populist govern­ments in Poland and Hungary took office, it was clear that the Euro­pean community was facing major challenges. These develop­ments have led to a restructur­ing of the cultural land­scape in these countries. It is there­fore important to discuss what influence reactionary forces have on the funding and shaping of the creative sector in Europe: What happens when film funding is in­filtrated by the state? How can the creative industry stand up to these develop­ments and what is its role in this? To what extent is their work depen­dent on the state and the political climate?

In light of the war on Ukraine, the conse­quences of bellige­rent politics for film and culture will also be dis­cussed. What role do film­makers and the film industry play in documenting re­pression and war crimes? How is their role changing and how does this shape their work?

The round­table focusing on Eastern Europe will discuss re­strictions on cultural and artistic freedom under the con­ditions of repressive and bellige­rent politics. The goal is to formulate, if possible, common (European) ideas, hopes and wishes. This cul­minates in the question, what kind of values and which prin­ciples are constitu­tive in Europe and how they can be pro­tected or restored.