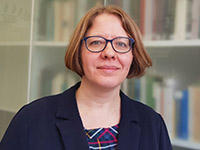 Dr. Claudia Baumgart-Ochse, senior researcher at Peace Research Institute Frankfurt, Hesse, has received the Alexan­der Foun­dation's 2019 Award for her academic work on the Middle East conflict. Baumgart-Ochse received her docto­rate in 2008 with a study on the role of religious Jewish settlers in the Israeli-Palestinian peace process. Since then she has researched and pub­lished on various aspects of the conflict. She regularly appears as an expert on the Middle East conflict at public events, in political education and in the media. Baumgart-Ochse also conducts research on the general role of religion in inter­national politics. A project sponsored by the German Research Foun­dation (DFG) under her co-direction examined the involve­ment of religious non-governmental organi­zations in the United Nations. In 2017 Baumgart-Ochse also took over the editorial mana­gement of the annual Peace Report.

The Alexander Foun­dation with its head­quarters in Frankfurt am Main was founded in 1999 by Alexander Zaleszanski. It promotes the sciences, especially peace research, as well as scientific and other coope­ration between Germany, Israel and Israel's Arab neighbours in the fields of peace research and inter­national under­standing. The promotion of peace in the Middle East, mainly between Israel and Palestine, is a particular concern.

The founder of the foundation, Alexander Zaleszanski, was born in 1914 in Grodno, Russia/Poland. During the Second World War he was drafted into the Russian army as a studied civil engineer, where he served as an officer. Since his entire family was killed in Treblinka, he started a new life after the war as a food whole­saler in Frankfurt, where he lived until his death in 2011. In 1999, he contributed his fortune to the foun­dation, which is primarily dedi­cated to supporting peaceful cooperation between Israel and its Middle Eastern neighbors, especially Palestinians. The Foun­dation provides temporary financial support to German and Israeli univer­sities and to univer­sities in Arab - prefe­rably Palestinian - neigh­boring states of Israel. It awards prizes to German, Israeli and Pales­tinian journalists and scholars who work for peaceful under­standing between Israelis and Pales­tinians.