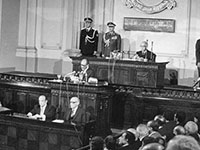 When protests erupted in response to the 2010 Egyptian parliament elections that were widely viewed as fraudulent, many won­dered. Why now? Voters had never wit­nessed free and fair elections in the past, so why did these elicit such an outcry? To answer this question, Weipert-Fenner conducted the first study of politics in modern Egypt from a parliamentary perspective. Contrary to the prevailing opinion that autocratic parliaments are meanin­gless, token institutions, Weipert-Fenner’s long-term analysis shows that parliament can be an indicator, catalyst, and agent of change in an authoritarian regime.

Comparing parliamentary dynamics over decades, Weipert-Fenner demonstrates that autocratic parliaments can grow stronger within a given political system. They can also become contentious when norms regarding policies, political actors, and institutions are violated on a large scale and/or at a fast pace. Most importantly, a parliament can even turn against the executive when parliamen­tary rights are withdrawn or when widely shared norms are violated. These and other recurrent patterns of institutional relations identified in The Autocratic Parliament help explain long spans of stable, yet never stagnant, authoritarian rule in colonial and post­colonial periods alike, as well as the different types of regime change that Egypt has witnessed: those brought about by external in­tervention, by revolution, or by military coup.