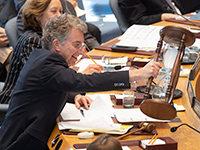 Since the beginning of 2019, Germany has been an elected member of the UN Security Council for a two-year term. The frame­work con­ditions are difficult: the number of violent state and non-state conflicts is at a histori­cally high level. At the same time, conflicts with and bet­ween the major powers are rendering the Security Council incapable of taking action on key issues.

More­over, the elected members have only limited influence. None­the­less, the skilful use of diplo­matic instru­ments and initiatives can certainly set important trends. In their contri­butions, the authors of the report discuss the extent to which Germany has so far succeeded in putting its own priority issues on the agenda and in ad­vancing the manage­ment of current conflicts. They draw up a mid-term review and present recommen­dations for 2020.