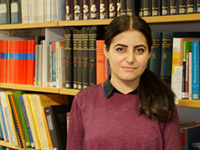 During her two month stay from October till December, Nikoghosyan is working on her research project on genocide commemoration practices among the Armenian community in the state of Hesse, Germany. Her stay is supportet by the CrossCulture Program by ifa (Institut für Auslandsbeziehungen), that supports civil society networks with other countries.

In 2018, while working at the Oral History Center at the Institute of Archaeology and Ethnography of the National Academy of Sciences of Armenia, Armenuhi Nikoghosyan conducted an oral history research among the Turkish people living in Armenia. This research project also became the topic of a brown bag lunch at PRIF, where she gave insights on the experiences of Turkish people in Armenia, and their challenges with integration and existing prejudices rooted in the past.

Armenuhi Nikoghosyan has been involved in Armenia-Turkey reconciliation projects since 2011, trying to contribute to the dialogue between the two neighboring societies.