Colombian experts inform themselves on political education in Germany, at the invitation of the Instituto CAPAZ 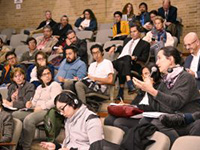 At the invitation of the Arbeitsgemeinschaft Katholisch-Sozialer Bildungswerke (AKSB) and the German-Colombian Peace Institute/Instituto Colombo-Alemán para la Paz (CAPAZ) - in which the HSFK is also involved - they will work on the structures of political education in Germany from 13 to 19 January 2020. Current approaches in the face of new challenges will also be discussed. The study trip is funded by the Federal Agency for Civic Education (bpb) and takes the group to Berlin and other places, where the participants will gain insights into the structures of extracurricular educational work, with a focus on memorial pedagogy, among other things. Braunschweig, Kassel and Gießen are further stations of the groups. There, they will work on approaches in school and extracurricular and digital political education work. The program ends with a science-practice workshop on political education in Giessen.