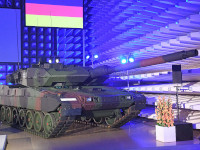 The German government claims to pursue a restrictive arms export policy. Indeed, there are ample laws, provisions and international agreements for regulating the trade of weapons, other military equipment and product licences. However, this dense and complicated web of norms has not led to a responsible practice of German arms trade. The new PRIF Report “German Arms Exports to the World? Taking Stock of the Past 30 Years” by Simone Wisotzki notes a vast difference between claim and reality.

Taking a look back over the past three decades, the report refers to numerous examples in which Germany grants licences and exports weapons of war and military equipment to countries that violate international humanitarian law in armed conflicts, but also to countries that severely violate the human rights of their citizens and to regions of tensions. Especially in these cases, German arms exports contribute to fuelling the arms dynamics and thus increase the risk that existing conflicts escalate and turn violent.

In line with legal experts and several parliamentary groups in the German Bundestag, Simone Wisotzki suggests the adoption of an arms export control law in order to turn the existing web of norms into a more effective legal basis. One of the most pressing issues to be dealt with is the so far very limited sanctioning mechanism for exporting arms into problematic countries and conflict zones.

Dr. Simone Wisotzki is a Senior Researcher in PRIF's Research Department I "International Security". The report is based on her study "Deutsche Rüstungsexporte in alle Welt? A review of the past 30 years" for Greenpeace.