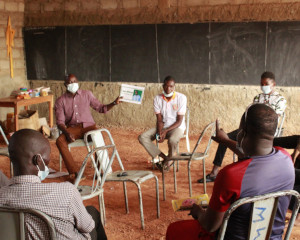 African regional orga­nisations such as the African Union (AU) and the Economic Community of West African States (ECOWAS) have become key players in managing political crises and resolving conflicts on the African continent. With this power, they have a strong influence on the conditions under which African citizens live today.

But how are these two regional orga­nisations and their inter­ventions perceived and evaluated by local societies? There are divergent as­sumptions about this. On the one hand, in the academic literature, African regional actors are ascribed a kind of per se legi­timacy due to their (cultural and other) proximity to the target societies. On the other hand, there is a wide­spread and generalised portrayal of African regional orga­nisations in public discourse as "clubs of heads of state" that only pursue their own interests.

Based on the intervention of ECOWAS and the AU in Burkina Faso in 2014/15 after the fall of President Blaise Compaoré, the authors Simone Schnabel, Antonia Witt, and Adjara Konkobo ela­borate the per­ceptions and evaluations of and knowledge about African regional orga­nisations. Their study is based on ten focus group dis­cussions and around 60 individual interviews con­ducted in the capital and in several places in the country by a Burkinabe/German tandem research team.

The authors show that local per­ceptions of regional inter­ventions are more complex and ambiguous than is generally assumed, and that the two orga­nisations still have some way to go to live up to their claim of being citizen actors.