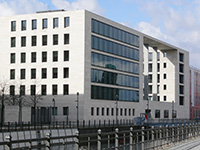 In June 2017, the German govern­ment published the guidelines “Preventing Crises, Resolving Conflicts, Building Peace” that lay out its strategy for engaging in crisis prevention and peace­building. The govern­ment has published its first report on the implement­ation of the guidelines on March 31, 2021. The Advisory Board to the Federal Government for Civilian Crisis Prevention and Peace­building has taken the opportunity to comment on the status of implement­ation of the guidelines and to make recommendations for setting priorities in the coming years.

The Advisory Board brings together civil society and academic expertise on crisis prevention and peace­building and advises the German government on the implement­ation of the guidelines “Preventing Crises, Resolving Conflicts, Building Peace”. It is composed of 20 experts from academia and civil society. Dr. Melanie Coni-Zimmer is a member of the Advisory Board.

In the implement­ation report, that has now been published, the German government documents the implement­ation of the guidelines along the lines of the 50 self-­commitments published in the 2017 guidelines. In its statement on the report, the Advisory Board acknowledges the progress made, for example in the area of peace mediation, in cooperating with civil society actors and including expertise from academia. Never­theless, there is still considerable need for improvements – especially in the areas of preventing structural causes of conflict, monitoring and evaluation and anticipating crises. Greater attention should also be paid to non-traditional security risks, such as climate change, and the coherence of German government action should be further strengthened.

The interim report of the German government and the statement of the Advisory Board can be found here (both in German).

One example of the inclusion of scientific expertise is PRIF’s study “Peace and Development 2020: An Analysis of Recent Experiences and Findings”, commissioned by the Federal Ministry for Economic Cooperation and Development. From the results of this study, the Federal Ministry derived recommendations for action for development cooperation in countries regions affected by violent conflict. The aim was to align instruments of development cooperation more effectively with long-term peace­building.