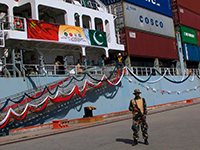 Ever since its announcement in 2013, China’s “Belt and Road Initiative” (BRI) has attracted significant attention from international observers, covering its impact on fields ranging from economic integration to geopolitics. However, the peace and security implications of the BRI have seen comparatively little interest, despite the heavy concentration of BRI-related investments in highly fragile and conflict-prone environments. This report focuses on BRI projects and their transformative impact on conflict dynamics in four of these countries: Pakistan, Myanmar, Kyrgyzstan and Uganda. It also provides some practical suggestions for improving local outcomes and strengthening international cooperation.

This report is intended as a first step towards a larger research program aimed at studying the BRI’s effects on conflict-affected states, and as a demonstration of this question’s relevance. It was written by authors from both PRIF and "Saferworld": Pascal Abb is Senior Researcher at PRIF's Research Department "Intrastate Conflict", Robert Swaine is Project Coordinator as part of Saferworld’s China Program, Ilya Jones is Saferworld’s Regional Conflict and Security Adviser for Central Asia and supports its Kyrgyzstan and Tajikistan teams.

Download: Abb, Pascal/Swaine, Robert/Jones, Ilya (2021): Road to Peace or Bone of Contention? The Impact of the Belt and Road Initiative on Conflict States, PRIF Report 1/2021, Frankfurt/M.