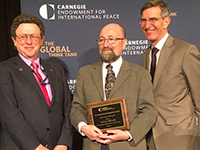 Washington, March 12, 2019 – Prof Dr Harald Müller, former director of PRIF, is awarded with the Thérèse Delpech Memorial Award by the Carnegie Endowment for International Peace. The award is offered, every other year, to an individual “who has rendered exceptional service to the non­govern­mental nuclear policy community”. These exceptional services include major intel­lec­tual contri­butions to critical debates but also “mentoring young women and men, con­struc­tively critiquing the work of others, creating fora for dis­cussion, and building net­works”. The award is also intended “to recognize individuals who through friend­ship, colle­giality, and respect, help model a collection of indi­vi­dual researchers into a community worthy of the name.”

The award ceremony took place at the Carnegie International Nuclear Policy Conference in Washington. 800 experts and represen­tatives from more than 45 countries and inter­national organi­zations attend the con­ference in order to dis­cuss and ex­plore solutions for current challenges in nuclear non­pro­liferation, arms control, dis­arma­ment, deter­rence, energy, and security.

"We are very pleased that Harald Müller's great commitment and outstanding achievements have been recognized internationally in this special way. On behalf of HSFK, we would also like to congratulate him," says Prof Nicole Deitelhoff, Executive Director of PRIF.

Previous winners of the award are all Americans: the US-diplomat and ambassador Linton Brooks, Michael Krepton, former director of the Stimson Center in Washington, and Catherine Kelleher, university professor at the University of Maryland.

The award’s name giver, Thérèse Delpech, who passed away in 2012, was a French nuclear expert, diplomat, author and distin­guished public intellec­tual. She has signifi­cantly contri­buted to France’s accession of the Nuclear Non-Pro­liferation Treaty in 1992 and the Com­pre­hensive Nuclear-Test-Ban Treaty in 1996. Harald Müller and Dr Delpech shared a long-standing colla­bo­ration and friend­ship.