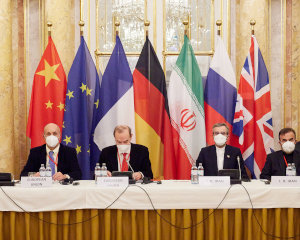 The establish­ment of a Weapons of Mass Destruction-Free Zone (WMDFZ) in the Middle East remains an urgent item on the inter­national agenda. But which approach has the best prospects of success? How should the inter­national community and states in the region address the issue in order to make the Middle East a more secure place, and what lessons should be learned from past initiatives in this area to avoid the collapse of the current UN process? Manuel Herrera Almela presents the positions of the most relevant states in the Middle East in terms of weapons of mass destruction (WMD) and then analyses the Joint Compre­hensive Plan of Action (JCPOA), which has been the only success­ful attempt to contain WMD in the region to date. He concludes that while the JCPOA is not a blueprint for the establish­ment of a WMDFZ, it provides many ideas and steps for confidence-building measures that can pave the way for future nego­tiations.

Manuel Herrera Almela is a researcher in the Multi­lateralism and Global Gover­nance programme at the Inter­national Affairs Institute (IAI) in Rome (Italy), where he coordinates the Institute’s activities within the EU Non-Pro­liferation and Disarmament Consortium (EUNPDC) and conducts research activities in the field of nuclear non­proliferation and disarmament. In 2022, he was a visiting researcher at PRIF for three months.