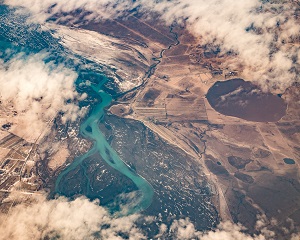 Studies of the Anthro­pocene continue to un­cover the complex and dynamic inter­relations between the societal world and the Earth system. At an inter­national con­ference on November 8 and 9, researchers from the natural sciences, engineering, social sciences and humanities have now joined forces to address the question of how these increasing mutual impacts can be better under­stood and further developed towards global sustain­ability.

What are the impacts of human activities on the Earth system? What conse­quences are associated with these impacts for society? And what affected­ness and options for action result from this for politics and each individ­ual? An approach to these questions was the subject of the first con­ference on “Integrated Earth System Research”, hosted by the Leibniz Research Network of the same name at the “Albert Einstein” Science Park in Potsdam.

The inter­disciplinary dialogue led to far-reaching conclusions: In general, science with its well-founded organis­ation by disciplines is not designed for the investigation of such big questions. Not only between the natural and engi­neering sciences on the one hand and the social sciences and humanities on the other, there are still few well-founded references for this. There is a lack of common frameworks that, for example, place simulation models for the Earth system in the context of quali­tative research on societal decisions and behaviour. The urgent need for advice to politics, business and civil society on alternative development paths and their consequences can therefore only be met to a limited extent at present.

The conference there­fore derived basic starting points for future research. Accordingly, inter­disciplinary termino­logies and concepts for integrated analyses of natural and societal systems across several spatial levels and time horizons are important. In addition, further foun­dations for the determi­nation of goals such as planetary boun­daries and planetary justice should be developed. Finally, it is im­portant for societal action to identify capacities and levers for societal trans­formations. Thematically, concrete needs for integrated Earth system research were discussed for the ocean, the water cycle and inland waters, bio­diversity, the bio­economy, urban-rural inter­linkages, conflicts, crises and security, as well as data and in­struments.

From PRIF, Stefan Kroll co-convened and introduced the trans­disciplinary panel “Earth System Change and Conflict: Politics of Scale and the Gover­nance of the Earth System,“ which brought together multiple per­spectives from Archeology, Anthro­pology, Eco­nomics, Inter­national Relations as well as Peace and Conflict Studies. Here, PRIF researcher Patrick Flamm provided an input about how to re-conceptualise “security” in the context of Earth System scale-change processes with a turn to eco­system resilience. The panel discussion illustrated the im­portance of planetary justice-perspectives as well as of the multiplicity of human-nature cultures as well as knowledge and value systems.

With a view to the COP27 taking place in parallel, it became clear that com­parable negotiation proce­dures are urgently needed for the entire Earth system. Climate and thus climate change mitigation and adap­tation are closely linked to other com­ponents of the Earth system, such as bio­diversity. Increasing public attention and growing efforts related to climate change prove that inter­nationally coordinated and locally im­plemented activities to preserve the Earth system are possible in principle.

Further information on the conference can be found on the Research Network website.