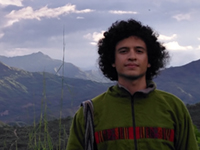 Of course, we would have preferred to welcome David Alzate personally in Frankfurt. Unfortunately, the Corona pandemic does not yet allow such a trip from Colombia to Germany. Therefore, we are glad to be able to welcome him at least virtually as a guest researcher from June to September.

In his research, Alzate focuses on the ongoing peacebuilding process in Colombia with a particular focus on the south­western department of Cauca. Drawing upon insights on the ‘differenti­ated territorial approach’ stipulated in the 2016 peace agreement with the FARC-EP(Fuerzas Armadas Revolu­cionarias de Colombia – Ejército del Pueblo), his project aims to analyze the tensions arising from state-level measures and the initiatives carried out by local communi­ties, particularly in coca-growing areas.

Since January 2019, David Alzate has been working as an early-career lecturer and researcher at Universidad Tecnológica de Bolívar in Cartagena de Indias. He studied Political Science and Sociology at Universidad Icesi (Cali, Colombia) and received his Master’s degree in Agriculture and Rural Develop­ment from the University of East Anglia (Norwich, United Kingdom). At PRIF, he is associated with the Research Depart­ment “Intrastate Conflict” and, in particular, with this department’s research in the context of the German-Colombian Peace Institute CAPAZ.