Research on “Transitional Justice” and protection of Human Rights 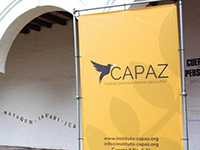 From 2021–2022, the German Foreign Office will fund a second phase of the project “Stabilization of the Colombian Peace Process through the Promotion of Justice, Truth and Human Rights” of the German-Colombian Peace Institute CAPAZ with approxi­mately 915,000 €.

Through its research activities, the project has been supporting the tran­sitional justice mecha­nisms in Colombia – the Special Juris­diction for Peace (JEP) and the Truth Commission (CEV) – since 2019. In this context, the project also supports the work of the civil society support group of the Truth Commission in Germany (Nodo Alemania). The aim is to also include the voices of Colombians living abroad into the peace process.

The project is being carried out by the Instituto CAPAZ in co­operation with the Justus Liebig University Giessen, the CEDPAL of the Georg August University Göttingen, the Truth Commission and the Special Juris­diction for Peace (JEP).

Further infor­mation on the research project can be found on the website of Instituto CAPAZ.

In order to support Colombia’s peace process in the areas of research, teaching, and counseling, since 2016 PRIF has been involved in the establish­ment and work of the German-Colombian Peace Institute (Instituto Colombo-Alemán para la paz, CAPAZ) in Bogotá, together with German and Colombian universities. The institute is funded by the German Academic Exchange Service (DAAD) with funds of the German Federal Foreign Office.