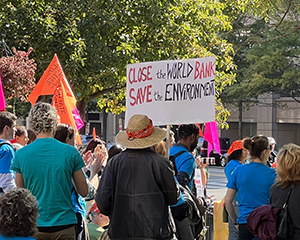 Melanie Coni-Zimmer and Diane Schumann attended and researched the dialogue forums of three inter­national meetings in Sep­tember and October 2022: the World Trade Organization (WTO) Public Forum in Geneva, the annual meeting of the World Bank and Inter­national Monetary Fund in Washington, and the annual summit of the G20 Civil20 Engagement Group in Bali. The topics discussed there ranged from food security issues, which have been ex­acerbated by the Ukraine war, to the conse­quences of climate change and the reform of inter­national economic organi­zations.

As part of the project "Legitimacy Policy through Dialogue Forums?", Melanie Coni-Zimmer and Diane Schumann are investi­gating how world economic organizations interact with their civil society critics. The project is led by Nicole Deitelhoff and funded by the German Research Foundation.

The first dia­logue forums were founded at the turn of the millennium in response to anti-globalization projects by civil society and have thus existed for more than 20 years with the aim of facili­tating a dialogue between civil society and representatives of inter­national organi­zations. Although the dialogue forums have become firmly established, they are at the same time contro­versial. Their useful­ness and the moti­vation of inter­national organi­zations to organize such forums are judged differently by civil society. Some participants see the opportunity for participation and direct inter­action with repre­sentatives of the relevant organi­zations as promising. Skeptical voices, on the other hand, see the dialogue forums as attempts by the organi­zations to undermine criticism.

With the onset of the Corona pandemic, the forums were initially cancelled for a time and subsequently held as virtual events. It was not until this year that they could again be held in person on site, which significantly facilitated and intensified both the exchange and networking between civil society organizations and with representatives of international organizations.