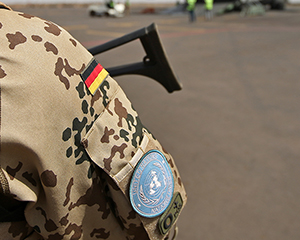 “Policy Cohe­rence for Peace in German Govern­ment Action: Lessons from Mali and Niger” is the fifth study of the Advi­sory Board to the Fe­deral Govern­ment for Civilian Crisis Pre­vention and Peace­building. The study was conducted by PRIF researchers Antonia Witt and Simone Schnabel in colla­boration with Dr Abdoul Karim Saidou of the Centre pour la Gouver­nance Démo­cratique (CGD) in Burkina Faso and Baba Dakono of the Obser­vatoire citoyen sur la Gouver­nance et la Sécurité (OCGS) in Mali. The focus is on the questions of how coherent German govern­ment action in Mali and Niger is with its peace policy guide­lines and how civil society actors in the two countries perceive this (in)­coherence.

The German govern­ment's guide­lines “Prevent­ing Crises, Managing Conflicts, Pro­moting Peace”, adopted in 2017, and the prin­ciples they set out are in­tended to serve as a strategic compass for the German govern­ment’s actions in (post-)conflict and crisis situations. Among other things, they for­mulate the claim to be guided by human rights, to act in a context-specific, inclusive and long-term manner, to make risks trans­parent and to give prio­rity to pre­vention. Based on the case studies on Mali and Niger, the new study sheds light on the extent to which German coope­ration in both countries follows the guide­lines and which factors promote or hinder policy cohe­rence for peace.

The study is also parti­cularly relevant against the backdrop of the debate about the reasons for the failure of the military engage­ment in Afgha­nistan. Will it be possible to learn lessons and prevent similar develop­ments as in Afghanistan? How will German engage­ment be assessed in the context of military missions in pursuit of such diverse goals as sustain­able develop­ment, counter­terrorism and the regulation of migration? Parti­cularly impor­tant for answering these questions is the per­ception of German govern­ment action by represen­tatives of Malian and Nigerien organized civil society, as well as the partici­pation of local experts in the study team.

The study provides im­portant insights for im­proving structures and the use of resources in Germany’s peace policy engage­ment, and not only in the Sahel. The results are thus also im­portant for the formu­lation of inter­departmental goals within the frame­work of the future National Security Strategy.

The study is available for down­load in German on the website of the Advisory Board for Civilian Crisis Prevention and Peace­building. English and French trans­lations of the study will follow. In addition, an article on PRIF blog by Antonia Witt and Simone Schnabel summa­rizes the key findings of the study. This post is already available in English, French and German.