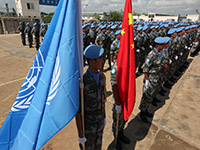 Over the past fifteen years, China has turned from a bystander of international peacekeeping operations (PKO) to one of their biggest contributors, often explained in terms of norm adoption or securing Chinese overseas investments. A new article by Pascal Abb in the Journal of Contemporary China sketches the historical evolution of China’s approach to peacekeeping through a role theory prism, explaining policy shifts through changing Chinese self-images and desired roles on the international stage. By studying influential academic and official discourses surrounding Chinese engagement with peacekeeping operations, it details processes of role contestation, and how peacekeeping became served to translate newly adopted roles into concrete policies. Finally, the article closes by examining China’s growing ambitions as a peace-bringer and the emergence of an indigenous doctrine on the peace/development nexus that could undergird future Chinese agency in conflict settings.

The article can be found on Taylor & Francis Online.