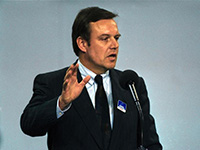 Volker Rühe (CDU), German Minister of Defense from 1992–1998, here at the federal party conference of the CDU in the Bremen Stadthalle in 1989 (Photo: Bundesarchiv, Wikimedia Commons, CC BY-SA 3.0).

The 1994 genocide against the Tutsi in Rwanda was a decisive event in world politics. It raised questions about the responsib­ility of the international community and the ability of its institutions to act in the face of the most serious crimes against humanity. The investigation of unresolved questions continues to this day. For Germany, this includes the question of the Federal Government’s conduct before and during the genocide.

In their study titled “Akteneinsichten. Die deutsche Außenpolitik und der Völkermord in Ruanda”, published by the Heinrich Böll Foundation, Sarah Brockmeier and Anton Peez shed light on Germany’s role with the help of specifically declassified files from the German Federal Foreign Office. Their analysis shows that German diplomats in 1993 and 1994 were better informed about the situation on the ground than previously assumed, but under­estimated the emerging danger and overlooked important warnings.

In addition to political mis­judgments, the paper also traces inter-­ministerial dis­agreements within the German government that prevented greater involvement in the Rwandan peace process and support for the UN peace­keeping mission prior to and during the genocide. In order to avoid repeating these mistakes in the future, the authors propose the increased use of “Early Warning” systems in German foreign policy as well as expanding inter­departmental strategies for “Early Action” in response to such warnings.