The German government does not adhere to its own Political Principles on Arms Exports, says the Joint Conference Church and Development (GKKE) 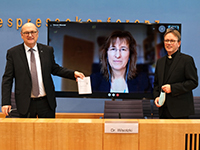 On December 17, the annual arms export report of the Joint Conference Church and Development (GKKE) was presented at a federal press conference in Berlin. The first year of the German govern­ment's app­lication of its Political Principles on Arms Exports is sobering and disturbing, stated Prelate Dr. Karl Jüsten, the Catholic chairman of GKKE: "It is marked by a growing gap bet­ween restrictive rhetoric and anything but restrictive practice. What we are currently observing raises serious doubts about the political will of the German govern­ment to pursue a respon­sible restrictive arms export policy," Jüsten said, referring to arms deliveries to numerous supporters of the conflict parties in Libya. The GKKE there­fore renews its call for an arms export control law to create a trans­parent and reliable basis for a restrictive arms export policy.

Develop­ments at the European level also require increased attention, as Prelate Dr. Martin Dutz­mann, the Protes­tant chair­man of GKKE, made clear. For example, "strengthening measures" for police and security forces in third countries can be financed within the frame­work of the European Peace Facility. In this context, Dutzmann said, the danger that arma­ments supplied by the EU will be used against the local population in the recipient state must be ruled out. "Decisions on equip­ment assistance from the Peace Facility must there­fore be taken transparently and be subject to broad scrutiny by the European Parlia­ment," Dutzmann stressed.

Dr. Simone Wisotzki, chair­woman of the GKKE specialist group on arms exports, under­lined that the approval values for arms exports in 2019, worth 8.02 billion euros, have reached a new record high. From GKKE's point of view, the high share of arms exports to third countries is particularly problematic. Compared to 2018, the authori­zations in 2019 have increased by almost one billion to 3.53 billion euros. "This under­lines once again that exports to third countries have become the norm. GKKE calls on the German govern­ment to adhere to its self-imposed principles and to stop supplying weapons of war to third countries without exception, unless it can actually provide a plausible foreign and security policy justifi­cation in a few individual cases," Wisotzki said.