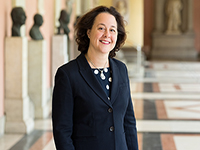 In 2020, PRIF again recognizes the best post-doctoral monograph in the field of peace research in honor of its long-standing director, Prof. Dr. Ernst-Otto Czempiel. This year, a jury of experts awarded the prize to the work “‘Crimes against Humanity’: Eine Ideengeschichte der Zivilisierung von Kriegsgewalt 1864–1945” by historian Prof. Dr. Kerstin von Lingen of the University of Vienna.

In her submitted work, Kerstin von Lingen deals with crimes against humanity as a criminal fact in international criminal law and its historical genesis since the middle of the 19th century. The author brings together research in historical and international law and works out how the political and legal debates, as well as the debates in civil society on civilizing war since the 19th century, have developed in such a way that the idea of outlawing and sanctioning certain war atrocities as “crimes against humanity” has increasingly appeared morally imperative, politically plausible and legally conceivable. Juror and PRIF board member Dr. Jonas Wolff points out: “The fact that the author specifically focuses on previously neglected actors (e.g. representatives of smaller states and civil society organizations) as well as events and institutions and opens up new sources for this new perspective makes her as empirically original as she is insightful.”

With the criminal offense of “crimes against humanity”, the possibility to make states liable for crimes against their populations was first created by the London Statute of 1945. Kerstin von Lingen takes a critical look at the widespread assumption that the juridification and civilizing of war took its impetus almost exclusively from the experience of the Second World War, the failure of the League of Nations and under the guidance of the victorious Great Powers. Instead, she creates an awareness of developments going back further: for example, the emergence of epistemic communities of legal scholars who influenced each other, sharpened their concepts and arguments, and ultimately had an enormous impact on the public and politics.

Through extremely meticulous and broad research – also outside the pertinent sources and literature on the subject – and the evaluation of previously unpublished documents, Kerstin von Lingen was particularly successful in tracing the important role of civil society organizations in the development of international law, according to the jury. With continuous work to ensure broad public attention for peace policy concerns, a redirection of policy away from national interests and retaliation motives is possible – the jury believes this to be impressively demonstrated by the book. “The volume shows that peace-related ideas and concepts can become of extraordinary real importance in a normative context”, says jury member and peace researcher Prof. Dr. Eva Senghaas-Knobloch (University of Bremen). “With ‘Crimes against Humanity’, Kerstin von Lingen has presented an impressive, empirically rich and highly relevant study on the history of ideas in the field of policy of peace, which deserves the Ernst-Otto Czempiel Award 2020”, adds juror Dr. Jörn Grävingholt from the German Development Institute.

Due to the current pandemic situation, the prize will be awarded in 2021 as part of the celebrations for the 50th anniversary of PRIF. The date will be announced on the institute’s website www.prif.org.

About Kerstin von Lingen
Historian Prof. Dr. Kerstin von Lingen is professor of Contemporary History with a focus on comparative research on dictatorship, violence and genocide at the Institute of Contemporary History at the University of Vienna. Previous stages of her academic career include deputy and visiting professorships at the Universities of Heidelberg and Brussels, as well as fellowships at the Lauterpacht Centre for International Law at the University of Cambridge and at the Australian National University in Canberra. Further information on her monograph “‘Crimes against Humanity’: Eine Ideengeschichte der Zivilisierung von Kriegsgewalt 1864–1945” at https://www.schoeningh.de/view/title/53201