Special Statement of the Peace Report on the Failed Afghanistan Mission 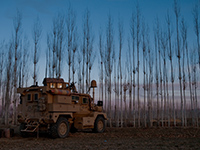 The Afghanistan intervention in the wake of September 11, 2001, was a serious turning point for German foreign, security and development policy. The failure in Afghanistan calls into question basic assumptions and practices of this, but also of other interventions. In a special statement, the editors of the Peace Report sum up the mission, analyze mistakes and make recommendations for the new German government. The statement was presented at a press conference on September 30 and published online.

The special statement takes stock and looks ahead at the same time. The editors Prof Conrad Schetter (BICC), Prof Christopher Daase (HSFK/PRIF), Prof Ursula Schröder (IFSH) and Prof Tobias Debiel (INEF) emphasize that the failure of the intervention has more than one cause. Rather, inadequacies at the level of multilateral and European cooperation, the military approach, and internationally supported state-­building had brought about the current situation. And ultimately, the lack of an exit strategy also caused the failure of the mission.

Deficits of the intervention have been repeatedly formulated and pointed out by peace and conflict researchers since 2001. However, too few resources have been made available for systematic monitoring and evaluation of the missions. The question now is what can be learned from this for future and current missions – the evaluation of the German contribution in Afghanistan and other foreign missions of the Bundeswehr has top priority.

Against this background, the editors of the Peace Report formulate the following recommendations in their statement:

1. Set up an independent commission on the future of German peace missions
2. Reorient Germany’s contribution to the fight against international terrorism
3. Formulate realistic goals for future missions and adapt them to local contexts
4. Identify more clearly the political risks of German missions abroad and plan for failure
5. Strengthen European civilian and military capabilities
6. Pursue rebuilding only with a clear strategy and risk assessment
7. Think about exit at an early stage

Over the past 20 years, the Peace Report has repeatedly addressed Afghanistan from various perspectives. At friedensgutachten.de/2021/themenseite-afghanistan you can now find a compilation of all contributions for free download (in German).

About the Peace Report

The Peace Report is the joint yearbook of the German Institutes of Peace and Conflict Research (BICC / PRIF / IFSH / INEF). It has been published annually since 1987. Researchers from various disciplines investigate the realities of conflicts in various countries around the world. Their analyses are the basis for the Editors’ Statement, which summarizes and assesses the results and formulates policy recommendations for peace and security policy in Germany and Europe.