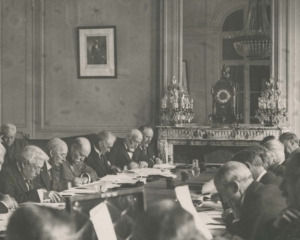 The 20th learning unit of the EU Non-­Proliferation and Dis­armament e-learning course produced by PRIF with the financial assistance of the European Union is online. It was written by Benjamin Haute­couverture from Fondation pour la Recherche Stratégique (FRS) in Paris.

This lear­ning unit aims to provide a brief history of arms control in a classical chrono­logical order, focusing primarily on the West, from anti­quity to the present. In doing so, it pos­tulates that arms control may be con­sidered a relevant dis­cipline from that time, along a more or less continuous chrono­logical line. In reality, there is nothing obvious about these assump­tions. In the strict­est sense, it could be argued that arms control as a dis­cipline emerged in the 1950s in the context of the bi­lateral US–USSR strategic relation­ship, within the very specific frame­work of the bi­lateral nuclear deterrence dialogue in a very dated context of ideo­logical and strate­gic bipolari­zation of the world. This is why the very question of what is arms control is posed as such in the intro­duction to this module, and must feed into the un­folding of a long history.

To be fair, it would be appro­priate to elaborate on this point by warning that this course is intended to illus­trate the various ways in which the West, in parti­cular, has approached the question of the volume of violence in military affairs, between human communi­ties which become essentially inter­state from the moment the modern state is born.

Naturally, because the dis­cipline is structured in the second half of the twentieth century, this course focuses on shorter periods and makes the subject more dense. The aim is to detail the different phases that led to a multi­plication of initiatives at the end of the last century, to the point where arms control became near synonymous with inter­national security.

At the time of writing, the Russian in­vasion of Ukraine has been ongoing for three weeks. This historic event, likely one of the founda­tional events of the present century, will leave its mark on the contem­porary history of arms control in a way that is still too early to define. Though it reminds us that the historical evolution of war itself has always been accompanied by attempts to limit its effects, whatever the method. The history of arms control is the reverse side of a history of war between peoples.

Further information can be found on our eLearning-website  and the programme-website.