#PRIF@School_Award presented for the first time to students in Hesse 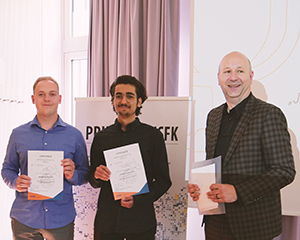 On July 8, 2022, the #PRIF@Schule_Prize was awarded for the first time to Hessian students in grades 9 to 13. The award winners had dealt innovatively with the topic of democracy and conflict in various formats. The seven-member jury, including the presi­dent of the Museum Ange­wandte Kunst Foundation in Frankfurt and the federal coordinator of the German UNESCO project schools, awarded a total of 5 prizes. The award ceremony took place on the Westend Campus of the Goethe University in Frankfurt. Two group projects and three papers were awarded prize money.

The award-winning podcast series “Eine Welt” (“One World”) of the Max Planck Gymna­sium Groß-Umstadt docu­ments the partnership between the high school and the Mekelle Adventist School in northern Ethiopia. “The podcast ‘One World’ has succeeded in building bridges. It is a sustain­able example of what the exchange of two schools in diffe­rent cultures can spark in terms of creative potential,” said Kathar­ina Iskandar, responsible editor of the Rhine-Main section of the ”Frankfurter Allge­meine Sonntags­zeitung” and jury member, in her laudation for the project.

For their project “Experienc­ing Regional Jewish History – Civil Society Commit­ment to Promoting Social Peace and Inter­cultural Under­standing”, the students of Class 11c of the Gymnasium Philippinum Weilburg visited the nearby Jewish cemetery together with their teachers and actively cleaned grave­stones there. The students then contacted descen­dants of the Jewish families buried there, who now live in Germany, Israel and the USA, with a letter and photos of the cemetery, and linked social commit­ment and local history.

The three winning papers by Leon Gutknecht, Nico Dieter and Yunus Emre Cakmak dealt with current, highly political and contro­versial conflicts and issues in inter­national relations and analyzed them on the basis of different sources. Jury member Klaus Schillig, federal coordinator of the German UNESCO project schools, emphasized: “[With their works], the authors make global connect­ions in politics and eco­nomics visible and they discuss the con­crete possibilities of working for peace, human rights and sustain­able development. This makes it directly visible how important political edu­cation and global learning are for a sustain­able school.”

PRIF con­gratulates all award winners and thanks all participants for their interesting sub­missions. Further information about the #PRIF@School_Award and a list of all awarded works and award winners can be found on the school award page.