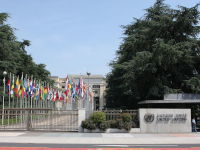 Professor Michael Bothe is one of the most prominent and influential scholars of international humanitarian law. His publications on legal restraints on the use of military force were not only important at the time of their publication. They continue to be relevant for the interpretation and further development of this highly important area of international law. In their new edited volume “Legal Restraints on the Use of Military Force”, Professor Thilo Marauhn and Barry de Vries have collected a wealth of writings by Michael Bothe which demonstrate that political ideals coupled with a sense of human responsibility can benefit from solid doctrinal underpinnings in international law.

The volume provides guidance, food for thought and incentives for debate in the international legal community, among practitioners and academics alike. Michael Bothe’s doctrinal skills, combined with his contextualized assessment of the law, and his deep empathy for the needs of human beings in difficult situations, with a particular view to the victims of armed conflict, will provide a stimulus to scholars to address these issues in the future.

Thilo Marauhn is a professor for public and international law at the University of Gießen and leader of PRIF’s research group on international law. Barry de Vries is an associated researcher at PRIF. Their edited volume “Legal Restraints on the Use of Military Force. Collected Essays by Michael Bothe” was published on 17 December 2020 by Brill & Nijhoff.