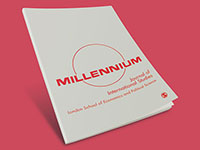 “Global IR” has become a prominent approach to remedy Eurocentrism in International Relations. As Anderl and Witt show, this approach has become possible based on diverse critiques such as non-Western, post-Western and pos­tcolonial per­spectives in International Relations. Global IR builds on them in order to synthesize a truly universal discipline which includes different experiences, histories and agencies.
In “Problematising the Global in IR”, Antonia Witt and Felix Anderl argue that this inclusive agenda – while praise­worthy in its intentions – may produce some perverse effects that ultimately lead to the perpetuation of inade­quacies in the field. This is because the approach is based on a cumulative approach that tries to subsume all existing theories under a broad “global” canon – rather than asking where this very idea of one global knowledge canon comes from in the first place and what its effects are on the distribution of power and wealth.

The article has been published in the “Millennium: Journal of International Studies” of the London School of Economics and Political Science and is freely available through an agreement between the Leibniz Association and Sage Journals.