... for her dissertation on complex power structures and divergent interests in the Syrian civil war 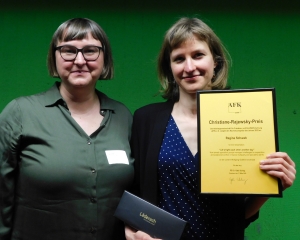 For her dissertation "Let's fight each other another day. How armed opposition groups managed challenges to cooperation and postponed conflict in Syria's multiparty civil war (2012-2019)" Regine Schwab receives the Christiane-Rajewsky-Award 2022 of the German Association for Peace and Conflict Studies (Arbeitsgemeinschaft für Friedens- und Konfliktforschung e.V. – AFK). Since May 2020, she has been working as a postdoctoral researcher at PRIF in the program area Transnational Politics.

In April 2021, she defended her disser­tation at Goethe University Frankfurt, which has resulted in two publications in Small Wars & Insurgencies and Terrorism and Political Violence. Another article is currently being reviewed. Her disser­tation focuses on the complex power relations and interests of the different factions involved in the Syrian civil war.

The disser­tation develops a new theoretical approach to understand the diverse relation­ships between armed groups in complex civil wars. These conflicts are still often por­trayed as zones of anarchy, in which numerous actors with different loyalties and goals fight against each other. At first glance, the Syrian civil war seems to be the prime example of such a conflict: thousands of mostly smaller opposition groups with different interests and ideologies, supported by a multitude of competing sponsors, acted more against each other than against their main enemy - the Assad regime. The author asks: Under what conditions can these diverse groups, which include both secular actors and global jihadists, cooperate with each other at all? And what are the implications of cooperation and its dis­integration for the course of the conflict?

Using the Syrian conflict as a theory-building case, Living to Fight Each Other Another Day develops a new typology of relation­ships between armed groups. Analyzing three case studies of armed group constellations in Northern Syria, four types of relation­ships (alignment, partnership, and hierarchy, as well as alliance as a special type of partnership that only occurs in the military domain) are traced. These case studies cover the ideological spectrum of opposition groups from secular Kurdish groups to jihadist actors such as IS and Jabhat al-Nusra and key areas of warfare in Syria.

The disser­tation uses material from more than 80 interviews in Arabic with participants in the Syrian insurgency; thousands of primary documents; data on inter-rebel cease-fire and peace agreements; and a database of military operations in the Syrian war. A better under­standing of the complex relation­ships between armed groups has implications for opposition groups as well as civilians living in rebel-controlled areas. Likewise, this has important conse­quences for both domestic and inter­national supporters or opponents. A better under­standing of relationships between armed groups is also central to inter­national conflict management efforts.

The Christiane Rajewsky Award is an annual prize awarded by the German Association for Peace and Conflict Studies to young researchers for out­standing contributions to peace and conflict research.