Visit of the Foreign Minister of Malaysia at PRIF to exchange on topics of international relations. 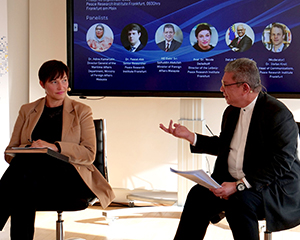 The Russian war in Ukraine has not only severely damaged the Euro­pean security archi­tecture. Its conse­quences for inter­national relations are global. In addition to the immediate suffering in Ukraine, the impact on energy and food security poses a threat in many parts of the world. The crisis of global multi­lateralism, which has been ongoing for some time, has been exacer­bated by the war and its aftermath. It has become even more difficult for the inter­national community to collectively address global threats to security, the environ­ment, and health. Against this backdrop, the panelists discussed how to regain lost trust in inter­national relations.

“Peaceful co­existence” does not only refer to the Soviet concept from the Cold War era. There is also a concept of “peaceful co­existence” in the Asian tradition, which refers to the coexistence of societies after colonialism, as both the Foreign Minister and Dr. Pascal Abb pointed out. Participants discussed how peaceful coexistence is possible both within states and in the inter­national community.

In addition to global challenges such as the war in Ukraine, economic and energy crises, and climate change, issues that are specifically important to Malaysia were also brought up. Dr. Adina Kama­rudin described the various interests and conflict situations around the South China Sea. Datuk Dr. Anis Yusal Yusoff reported on a project that examines social cohesion in Malaysia and serves as an early warning system for ethnic conflicts. Prof. Dr. Nicole Deitelhoff empha­sized the importance of discussing new ways of co­existence. Foreign Minister Dato' Sri Sai­fuddin Ab­dullah pointed out that peace starts with each individual, but is not possible without multi­lateral cooperation.