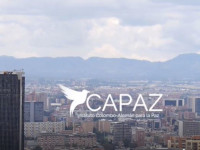 Following the escalation of violence in Colombia in recent days, the Instituto Colombo-Alemán para la Paz (CAPAZ) and associated researchers from Germany and Colombia have issued a statement calling for the right to protest and freedom of expression. The Colombian government is called upon to protect human rights and to investigate the violence against protesters.

The statement says social protest should not be violently repressed or criminalized. The police violence being used violates the constitutional right to demonstrate, threatens democracy, and risks undermining the legitimacy of the Colombian state as a guarantor of human rights. The signatories emphasize the importance of the peaceful resolution of conflicts, respect for the freedom of expression and opinion as indispensable components of peace. Among the more than one hundred signatories of the statement is Jonas Wolff, researcher and Head of the Research Department „Intrastate Conflict“ at PRIF.

To the statement of the Instituto CAPAZ in German and Spanish.

After the Colombian government announced a tax reform, the last few days have seen violent protests, causing several injuries and deaths. According to the human rights organizations “Procuraduría General de la Nación” and “Defensoría del Pueblo”, there have also been cases of sexual violence by members of the security forces. The situation in Colombia is being perceived internationally with concern and has led to demonstrations in Germany, among other places, against human rights violations in the course of the protests.

In order to support Colombia’s peace process in the areas of research, teaching, and counseling, since 2016 PRIF has been involved in the establishment and work of the German-Colombian Peace Institute (Instituto Colombo-Alemán para la paz, CAPAZ) in Bogotá, together with German and Colombian universities. The institute is funded by the German Academic Exchange Service (DAAD) with funds of the German Federal Foreign Office. The Institute has since become the nucleus of a broad academic network within Colombia and between Colombia and Germany in which the central themes of the peace process are dealt with. In particular, universities from regions of Colombia that are most affected by the conflict are involved.