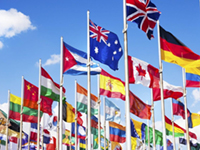 In the new PRIF Working Paper "It's Complicated: A Conceptual Framework for Studying Relations and Interactions between International Norms", Caroline Fehl and Elvira Rosert develop a conceptual framework for the analysis of norm complexity in international politics.

Does norm complexity help or harm the emergence, spread, and robustness of individual norms? Does it enable or constrain norm promoters and addressees? Does it empower strong or weak actors? These questions form part of the research agenda set out in the working paper, which focuses on the effects of norm complexity. As norm complexity, the authors define norm relations, i.e. the structural positions of norms vis-à-vis each other, such as contradictions and hierarchies, and norm interactions, i.e. processes occurring between different norms, such as conflicts and cascades. By proposing typologies of norm relations and norm interactions, the working paper contributes to recent research on international norms, which analyses norms in the context of the increasing density and plurality of the global order.