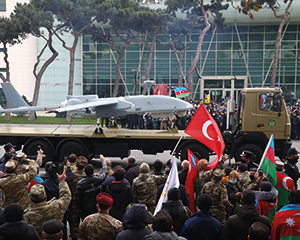 In the second Nagorno-Karabakh war in 2020, Azerbaijan achieved a decisive victory over Armenia. Quite sur­prisingly, Israel was a key player in this conflict, by providing Azer­baijan with extensive support in the form of technology and arms. At first glance, Israel seems like an irrele­vant or marginal actor in this ex-territory of the Soviet Union. Yet, its support for Azer­baijan is highly relevant and part of a bigger research puzzle: How can Israel’s involve­ment in this conflict be explained? The new PRIF report by Eldad Ben Aharon offers an expla­nation by showing how both geo­political factors and identity struggle are inter­twined. Using the lens of critical geo­political analysis, the report argues that not only realist factors, but also social con­structions of security as well as national and cultural identity play into Israel’s interest in the region.

Eldad Ben Aharon was a Post-Doctoral Minerva Fellow (2020–22) and is currently an Associate Researcher in PRIF’s research department “Glocal Junctions”. He is also a Visiting Fellow at the Inter­national Centre for Policing and Security at the Univer­sity of South Wales. Eldad Ben Aharon obtained his PhD in history from Royal Holloway Uni­versity of London in 2019. His research lies at the inter­section between inter­national history, foreign policy analysis, elite interviews, and critical security studies.