Felix S. Bethke analyzes the effects of peaceful and violent transitions on the quality of young democracies 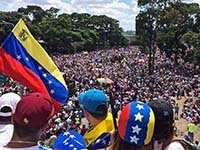 Protesters in Venezuela hoping for democratic reforms too. Photo: Voice of America/Wikimedia Commons

Consolidating democratic institutions and procedures is a highly difficult challenge for young democracies after their transition from autocratic rule. Evidence suggests that the form of transition has a decisive influence on the later quality of democracy in a country. PRIF senior researcher Felix S. Bethke – together with his colleagues Daniel Lambach, Markus Bayer, Matteo Dressler and Véronique Dudouet – compares democratic transitions resulting from peaceful protest, violent protest and top-down liberalization in their new volume “Nonviolent Resistance and Democratic Consolidation”.

Based on case studies on countries in Latin America and Africa, the authors argue that nonviolent resistance is not just an effective means of deposing dictators: It can also increase the chances of consolidating a young democracy, understood as at least two peaceful handovers of power through democratic procedures, as it creates a more inclusive transition process that is more resistant to democratic breakdown in the long term.

The volume “Nonviolent Resistance and Democratic Consolidation” was published by Palgrave MacMillan and is available as hardcover and eBook.