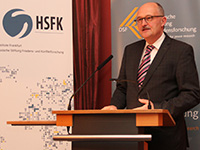 Extremisms are a challenge for our pluralistic society. Although we hardly see an increase in the number of extremists - whether political or religious - active groups are becoming increasingly visible in public. Hence there is need for a change in strategy: prevention work must become more involved in the public debate. Conflict and debate skills are important elements of successful prevention programs and deradicalization work, alongside confidence-building and integration. How do we organize productive debate? What are the resulting political options for action? These were the key questions of a parliamentary evening on 29 January 2020 in Berlin. The research network "Gesell­schaft Extrem" (“Extreme Society”) coordinated by PRIF and the German Foundation for Peace Research had invited to the event in order to talk to members of the Deutscher Bundes­tag and representatives of various ministries.

After a welcome address by Michael Meister, Parliamentary State Secretary at the Federal Ministry of Education and Research (BMBF), Nicole Deitelhoff (PRIF) and Judy Korn from the Violence Prevention Network (VPN) gave thematic impulses.
Nicole Deitelhoff emphasized the relevance of controversy for democracy: "In the public sphere, there is a need for debate that is not intended to convince one person, but to initiate the discussion in the first place, and to let the democratic audience experience that there are different positions. Democracy is the most beautiful and at the same time most strenuous form of government, which must be defended on a daily basis. The ability to argue and the desire to debate must be anchored even more firmly in the education system than before and should be given more weight in political education in particular. Judy Korn agreed with this, but emphasized that in prevention work with highly radicalized people, for example in prison work, the ability to argue plays an important role, but that trust and dialogue are decisive - direct confrontation rarely leads to results.

The research association “Gesellschaft Extrem. Radikalisierung und De­radikalisierung in Deutsch­land“ ("Extreme Society. Radicalization and De­radicalization in Germany") was coordinated by PRIF from 2017 to 2020. The research network consisted of over 20 inter­national experts and was supported by six partner institutions. The aim was to compare the state of radicalization research in an inter­disciplinary and systematic way in order to derive options for action against radicalization and to strengthen democratic values. In addition, one focus was on the transfer of knowledge between research and practice.