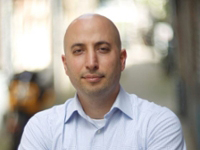 Starting from March 2020 and for the duration of two years, Eldad Ben Aharon will be a postdoctoral Minerva Fellow at PRIF. The Fellowship Programme of the Minerva Endowment enables Israeli and German scholars to complete an extended research residency in the respective other country in order to promote their research, but also promotes the cultural and scientific exchange between Germany and Israel.

In his PostDoc research project, Ben Aharon examines the way the perpetrator successor states of the Armenian Genocide and the Holocaust, i.e. the Federal Republic of Germany, the German Demo­cratic Republic and Turkey, dealt with the UN Convention on the Prevention and Punish­ment of the Crime of Genocide (1948) in the early phase of the Cold War. In his project "Nation Building and the Perpetrators of Genocide: Memory, State Security and the Cold War" he analyzes how the memory of the Holo­caust and the Armenian genocide were leveraged by the three states for state security, governance and diplomacy. In addition to working with archival records, Eldad Ben Aharon will also conduct interviews with German and Turkish state officials and veteran diplomats.

Ben Aharon studied Inter­national Relations and Pedagogy in Israel, Holo­caust and Geno­cide studies in the Nether­lands and received his PhD in history from the Royal Holloway University of London in 2019. Ben Aharon specialized in the field of modern Middle Eastern studies and the region’s diplomatic history during the Cold War. His research is focused on Israel’s foreign policy from 1948 to the present. His other main areas of interest are memory studies, comparative genocide studies, and the theory and practice of oral history.

Interview: Eldad Ben Aharon on the Use of Oral History in the Study of International Relations, American Oral History Association