As the military standoff over Ukraine continues, both sides have attempted to mobilize international support for their respective positions. While Kiev has received in­creasingly robust NATO backing, Russia has turned to its “strategic partner” China. A recently published joint Sino-Russian statement has fueled speculation that Beijing could weigh in on Moscow’s side and perhaps even lead to the resurgence of competition between ideo­logical blocs in world politics. However, diverging interests on Ukraine limit such co­operation in the short term. A long-term align­ment between both sides is a more serious possibility, but can still be influenced by Western policy choices. 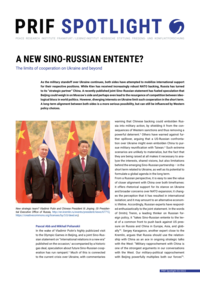