On 7 August, she finally had enough. Carla del Ponte, former UN Prose­cutor for the Former Yugos­lavia and Rwanda, told reporters that she was stepping down as a member of the Independent Inter­national Commission of Inquiry on Syria. Since 2011, the UN panel has meticulously documented mass atrocities committed by all sides of the Syrian war. And yet, its inves­tigations have not led to the creation of any tribunal or court, prompting Del Ponte to denounce it as an “alibi” for the inter­national community. Why has criminal accoun­tability – as a major element in the broader search for justice – remained so elusive in Syria? Which path­ways, both well-trodden and novel, have been tried to circumvent political road­blocks? Where could the inter­national community still do more? 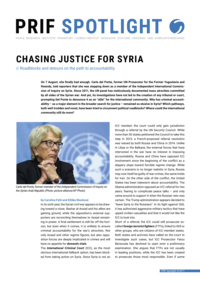