Kenya had awaited the presidential elections held on August 9, 2022 with bated breath. The elections were won by William Ruto, who defeated opponent Raila Odinga by just a few percentage points. Ruto succeeds Uhuru Kenyatta, who leaves office having served his two permitted terms. This Spotlight analyzes the reasons for Ruto’s success, and, reflecting on his political career, discusses what can be expected from his presidency. We argue that both his success and his career have been strongly influenced by Kenya’s political history and the power structures of political alliances—especially in the context of previous elections. 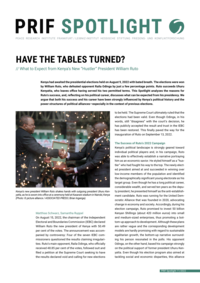