Since Rodrigo Duterte was elected President of the Philippines in 2016, he has been responsible for the killing of thousands of Philippine citizens in his war on drugs, threatening political opponents and increasingly undermining crucial political freedoms. International media condemns his government as oppressive and illiberal, at the same time surveys show that the vast majority of the country’s population support Duterte's law and order politics. In this report, Peter Kreuzer explores how a rogue politician could become the most popular president in years. He gives insights into Philippine clientelistic politics, political elites and Filipinos’ desire for a politician who puts his promises into action.

The online appendix with additional data is available for download (Excel sheet). 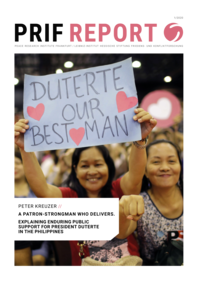