Since the outbreak of the war in Yemen in 2015, the state has seen a growing influx in the supply of weapons. These weapons are both legally and illegally provided by regional and international powers to all major factions of the conflict. While arms transfers and their effects on the conflict in Yemen have received considerable attention, a lesser known fact is that weapons are increasingly circulating between Yemen, Somalia and Djibouti – the three states adjoining the Gulf of Aden. Against this background, this text shines the spotlight on weapons flows dynamics in a highly militarized region. 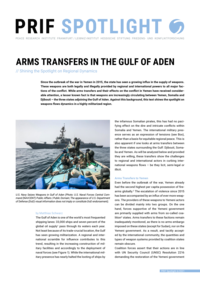