Since June 30, Rodrigo Duterte’s presidency has been a thing of the past. This Spotlight asks why police forces in the Philippines were so willing to carry out the killing of drug personalities at Duterte’s behest in 2016 and what that may mean for the future. I argue that the inability to successfully bring suspects to justice and the resulting damage to the police’s self-­image as a potent guardian of peace and order foster vigilante activities by police where a political and social environ­ment exists that legitimizes such a strategy of violent crime control. 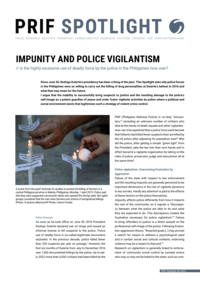