In many countries around the world, civil society organizations are facing increasing restrictions that constrain their autonomy, capacity and/or freedom of action. While the general phenomenon of shrinking civic space and the adoption of legal restrictions in particular have become more widespread since the early 2000s, there are also cases in which governmental attempts to adopt restrictive NGO laws have been frustrated, aborted or, at least, significantly mitigated as a consequence of domestic and/or international resistance. This PRIF Report takes a look at four such cases (Azerbaijan, Kenya, Kyrgyzstan and Zambia) and identifies conditions and dynamics that help understand successful resistance against legal civic space restrictions. 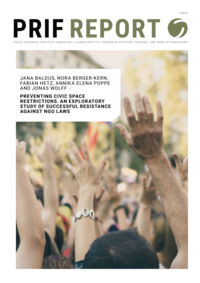