When he took office, Obama promised to launch “a new chapter of engagement” with Latin America. Jonas Wolff examines the evolution of US relations with Bolivia and Ecuador during both the second Bush presidency and the first years of the Obama Administration. Surprisingly, he discerns no remarkable differences between the two policies. On the one hand, the Bush Administration reacted less confrontationally than anticipated to the election of left-wing political leaders Morales and Correa. On the other hand, Obama largely continued the pragmatic policies of the later Bush years. The present study searches for motives and identifies the limits inherent in contemporary US policies toward Latin America. 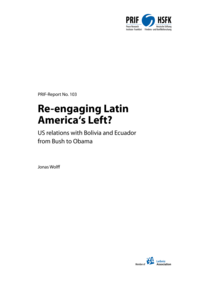