For years the pharmaceutical industry succeeded in massively restricting the production of generic medicines and thus also impeding access to urgently needed treatments – particularly for people in the Third World. As justification, it cited the protection of intellectual property, detailed rules for which were laid down in the TRIPS agreement of 1994. However, rising states, working with civil-society allies, managed gradually to bring about an easing of patent-protection rights in favour of increased regard for the right to health, thus effecting a complete reversal in the norm hierarchy. The authors analyse this development and formulate a number of corresponding recommendations as to how changes in norms and orders might be successfully brought about in future.

Saskia Scholz/Klaus Dieter Wolf, Transformation of an Order through Reversal of a Norm-Hierarchy. The Protection of Intellectual Property and the Right ot Health, PRIF Report No. 131, Frankfurt/M., 2015. 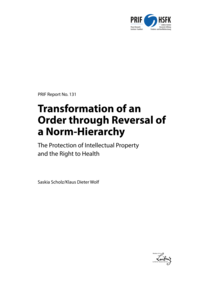