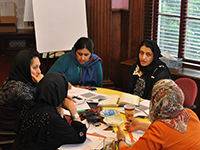 The evacuation process of people from Afghanistan to Germany and other countries has ended a few weeks ago and still, many people especially women, girls and women’s human rights defenders face dangerous life-­threatening realities on a daily basis by the Taliban. Human rights organizations call on governments to still evacuate and assist endangered people, especially women, who face an increased risk of not only sexualized and gender-­based violence but a significant threat to their livelihoods.

Germany’s Minister of Foreign Affairs Heiko Maas announced on the ministerial meeting of the General Assembly of the UN: “We will continue to support and empower Afghan women and girls. For this reason, we are significantly increasing our humanitarian aid to Afghanistan with the focus of the special needs of women.” As much as women and girls need protection, their agency and participation in political decision-­making processes is crucial and in­dispensable. The protection of women in conflict and their relevance of partici­pating in political decision-­making processes regarding security is regulated in the United Nations Security Council Resolution 1325 but was barely adhered to fully within the last years. However, while much was said about women’s rights in Afghanistan, the voices of women and marginalized groups have only sporadically been trans­mitted in the media and political discourse with limited substantial inclusion in political decision-­making processes by the inter­national community as well as by local key stake­holders. This stands in direct contra­diction of the alleged justifi­cation of Western inter­ventions to liberate women in Afghanistan.

This panel discussion concen­trates on voices of women from Afghanistan and human rights activists, amplifies the historical and current situation of women in Afghanistan. It aims at critiquing and countering the narrative that currently centers around military accomplish­ments and the ‘liberation’ of women as an achieve­ment by Western powers. Furthermore, the speakers will reflect on the actions of the German govern­ment regarding the evacuation process and its commit­ment to its newly adopted National Action Plan on Women, Peace and Security in 2021 as well as its current efforts of assisting the people in Afghanistan.

The event is co-organized by Heinrich-Böll-Stiftung Hessen.