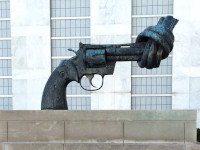 Humankind has always been perturbed by the use of particularly cruel means of war. As a result, a number of actions have been taken to restrict such use. Among those, the establishment of the United Nations Disarmament Machinery has been a most notable step. As a key proponent of disarmament since its creation, the UN have over the years heavily and naturally contributed to the definition of the disarmament architecture, pursuing two main goals: first, the elimination of weapons of mass destruction; and second, the regulation of conventional arms, particularly the illicit traffic of small arms and light weapons.

Learning unit 18 of the EU Non-­Proliferation and Dis­armament e-learning course focuses on the work and the efforts of the United Nations Disarmament Machinery in promoting arms control, non-proliferation and disarmament. The unit is authored by Federica Dall’Arche, researcher at the Istituto Affari Internazionali (IAI) in Rome, and produced by PRIF with the financial assistance of the European Union.

The new unit covers the basic concept of disarmament and its objectives from a UN perspective, the UN’s institutional framework including main bodies and main instruments pursing disarmament goals, as well as the interplay between the UN and the European Union in achieving arms control and disarmament objectives.

This unit’s six chapters include videos, photos, quizzes and diagrams and provide participants with basic knowledge on the UN’s role in promoting non-proliferation, arms control and disarmament. It builds upon the knowledge acquired during the previous units, which cover a wide range of topics from arms control theory, weapons of mass destruction and conventional weapons to humanitarian arms control, new techno­logies, gender and dis­armament.