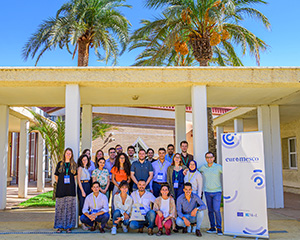 A direct impact of the Ukraine war was ex­treme price increases and shortages of food, which hit the southern Medi­terranean countries parti­cularly hard. The impli­cations for social justice and inclusion were discussed at this year's annual conference of the Euro-Mediterranean Study Commission (EuroMeSCo) in conjunction with longer-term develop­ments such as reforms of social security systems and the (now accelerated) trans­formation of the energy market. PRIF was represented at the country conferences in Tunisia by Clara-Auguste Süß in September and in Egypt by Irene Weipert-Fenner in October.

Clara-Auguste Süß also participated as a member of the Youth Lab Board in the fifth “Euromed Young Researchers Forum” in Mollina, Spain, September 16–17, 2022. Under the theme “Bridging the Gap in Euro-Mediterranean Relations: Youth as Drivers of Social Cohesion” and coordinated by IEMED, 24 young re­searchers, think tankers, and activists from over ten countries addressed topics including social cohesion, digital trans­formation, and the impact of the war in Ukraine. The program was comple­mented by training on designing policy recommen­dations and fore­sight techniques.

“The forum provided a unique space for ex­change, discussion and generating ideas and showed me again how much potential there is in equal co­operat­ion bet­ween both shores of the Mediterranean”, says Süß looking back on the event. “More­over, as an agent of change, youth is rightly at the center of EU policies. Decision-makers should there­fore seek to involve young people, their know­ledge and experience even more in policy-making.”

EuroMeSCo is an EU-funded network of research institutes in the Euro-Mediterranean region, of which PRIF is a member.